In an effort to keep the community safe in response to the COVID-19 pandemic, City Hall is closed to the public. City staff will still be conducting business. If you need assistance, please call (402) 759-3109. We encourage Geneva residents to place utility payments in the mail, or in the drop box locations - one by the front door and one in the parking lot south of City Hall - or call to pay by debit or credit card.

Click on COVID-19 Response from the menu to the left for more information on the City of Geneva’s action plans.

Are you looking for more information on the Geneva Community Center project? 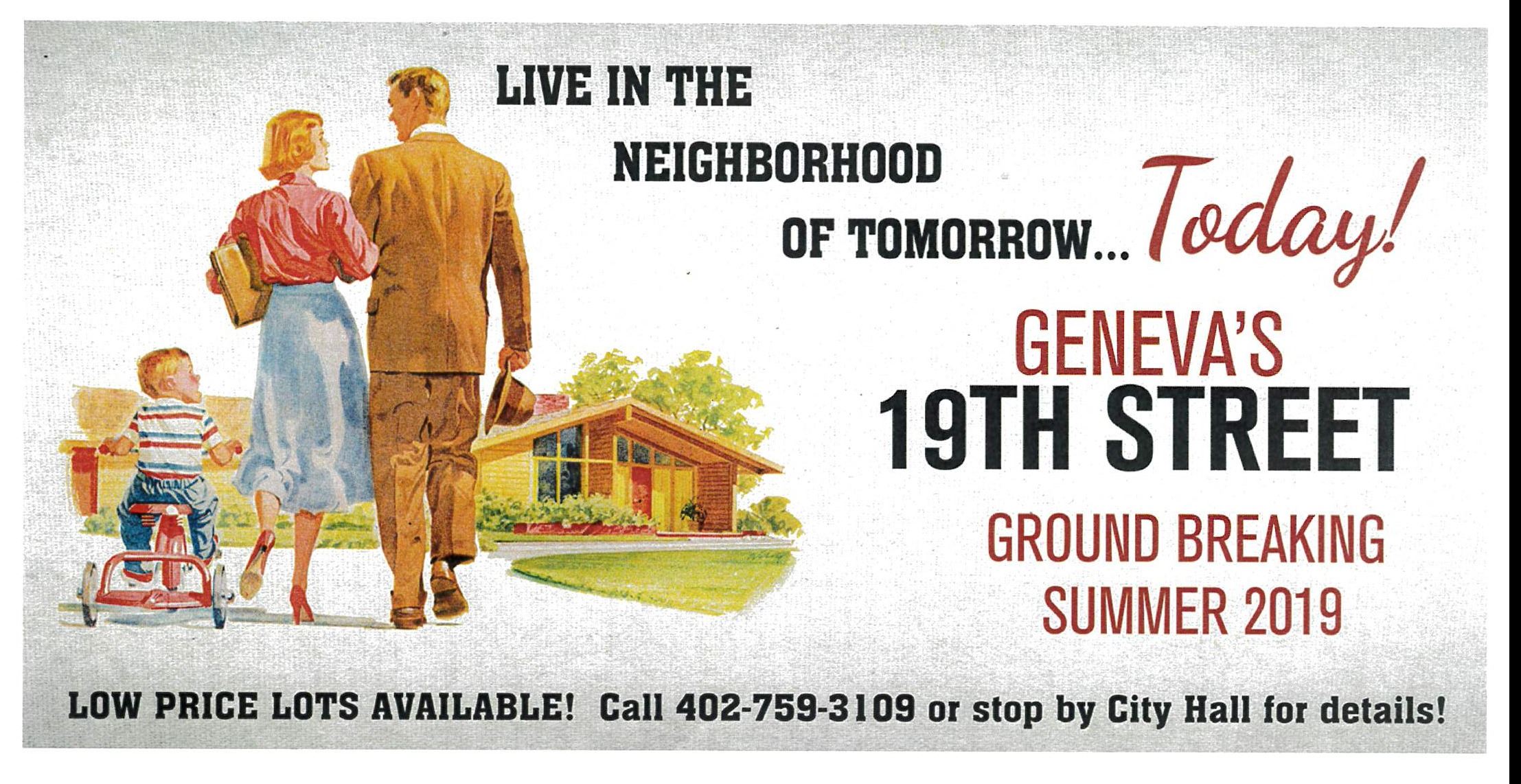 Just off the street, a mini-billboard advertises housing lots for sale. Its picture and slogan – “Live in the Neighborhood of Tomorrow … Today” – is a quirky take on the billboard Marty McFly parked the DeLorean behind when he landed in 1955 in Back To the Future.

The movie billboard advertises the housing development Lyons Estate, depicting a family of that era gazing at a sky blue ’50s house.

The sign is a conversation-starter but I like its symbolism, the way it gives a nod not to the past, but to a time in the past when small towns were looking ahead to futures that seemed full of potential.

That wasn’t the case for most rural Nebraska towns, of course. There were losses ahead, of population, jobs, school districts, farms, and more. Time has not been kind to some, and the scars show.

That’s why, as Geneva Mayor Eric Kamler watched the road and plans take form – he had goosebumps, he said, and he means it literally. Eric is 29,seven months into his first term as mayor, and he chooses to see possibility ahead for the town from where he graduated high school.

The new street, the housing development and other improvement projects underway are all about shaping Geneva’s future and trying to make it a place of opportunity.

Within five years’ time, Eric pictures 12 new homes with green lawns and backyard barbecues. A planned community center is included in the neighborhood, which is bordered by the Fillmore Central Elementary school and Fillmore County Hospital.

Towns and their civic leaders have to be proactive and purposeful right now, in Eric’s opinion.

“I consider myself pretty conservative, but I think the small towns that don’t move forward with this kind of activity – they will be the ones left behind. I don’t want Geneva to be left behind.”

Eric travels a swath of the state in his role as Community Liaison–Agriculture Specialist with Rep. Adrian Smith. The housing shortage that led to the new housing development in Geneva is common to many Nebraska towns, he explains. While there are some homes available in the $300,000 range and some in the $50,000 and under range, there’s a big void in the middle, right in the $150,000 to $275,000 range that many rural workers can afford and want to live in.

The effect of the shortage touches each city sector.

“If a family moves to Geneva and finds a good job, at our hospital, or our school, and they look around and can’t find a home to buy, they are going to find it in another town and commute in. We want them to raise their families here, put their kids in the school system, shop here … this isn’t just an economic thing, it’s a growing-of-the-town-thing.”

Geneva turned to LB518 for a solution. Approved in 2017, it led to the Rural Workforce Housing fund that helps rural communities address workforce housing needs. Geneva secured a matching grant in conjunction with four other Nebraska communities/entities (Fairbury, Auburn, Deshler, and the Southeast Nebraska Development District) and invested about $250,000 to a revolving loan fund under the terms of the bill.

The program essentially allows the city to subsidize the housing lots and sell them at about 50 percent of the actual cost, which is expected to encourage developers to build homes that people looking to move or relocate in Geneva will buy.

A groundbreaking is planned later this summer. One lot is sold and a developer is close to breaking ground on a $275,000 home (the maximum stipulated in the grant.)

Having the street and the first home in place will give energy to the project, Eric predicts. It won’t give everyone goosebumps, he knows, but he hopes they catch some of the excitement when they think about the development as one piece in a string of projects meant to push the city forward.

There are many decisions and many people behind the project, he points out. With any luck, it will be as successful as Geneva’s aquatic center. Three years ago, the city replaced its 1953 pool with a $3 million waterpark. The project was led by a citizen committee who saw it through from a successful bond issue to the grand opening of a center whose tall red slides have drawn a few curious drivers off nearby Highway 81 to see what it’s about. The center quadrupled pool attendance to an average of 250 a day its first year.

There are good things ahead in his town – and he wants each one to build on the other. Construction of a new $4 million community center is expected to begin in 2020.

In the fall, the renovation of two Main Street blocks begins, upgrading a bumpy stretch of the entrance to downtown and tying it into the historic features of Geneva’s town square.

Eric’s voice is animated as he talks about adding a street island, landscaping, old-style 1930s street lamps and finally the focal point – a historic, fully renovated Geneva sign salvaged from a junkyard and refurbished to hang again in all its neon glory.

Come see it. Come be a part of it. Look for more to come, he urges.

Rebecca Svec is the marketing coordinator for Fortify Group of Shickley, Geneva, and North Platte. She grew up in Gage County and now enjoys life on a farm near Milligan. Her career in journalism, communications, and marketing has put her in the middle of interesting stories in communities around the state. 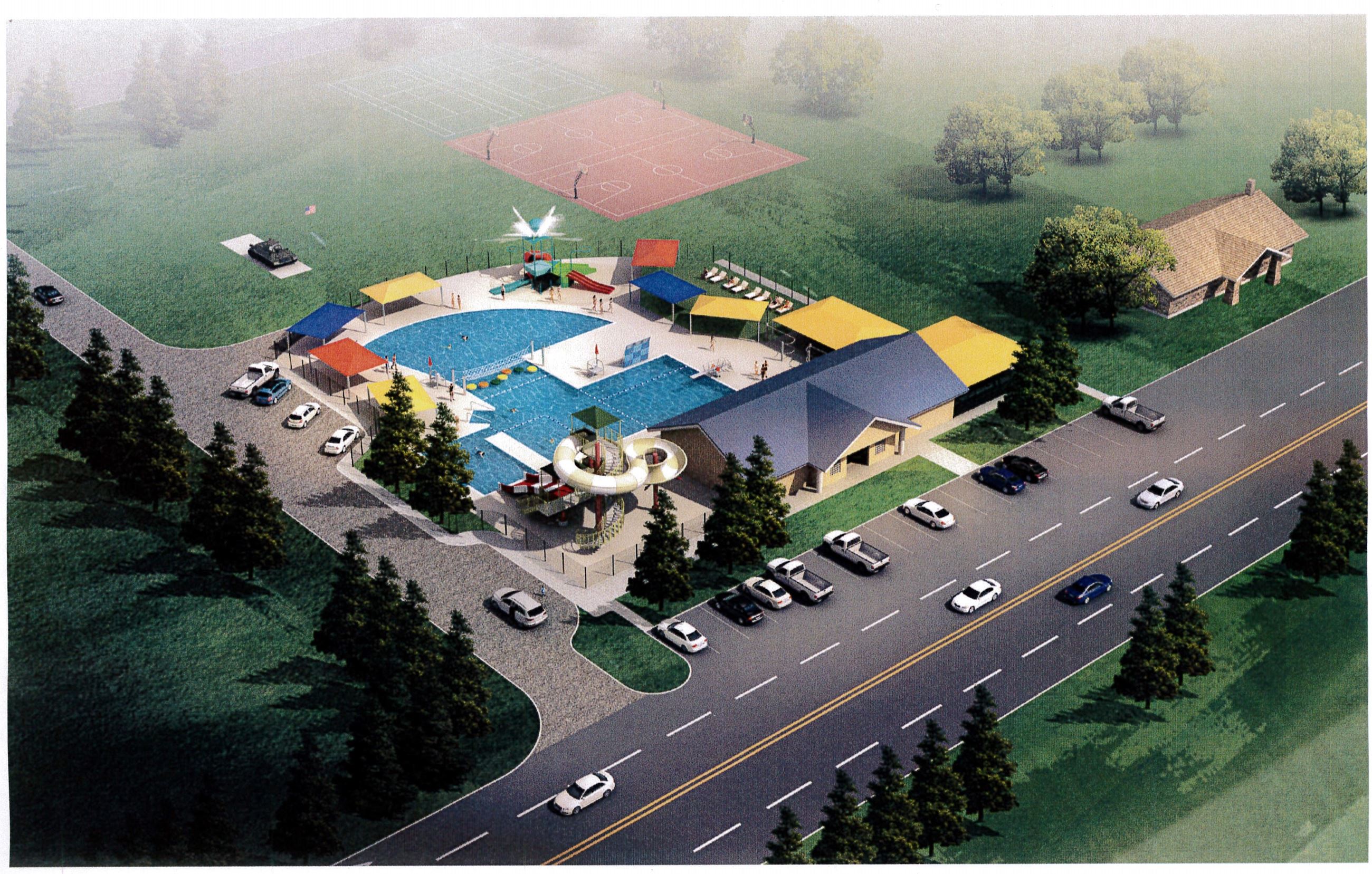 FAQs
Notify Me®
Report a Concern